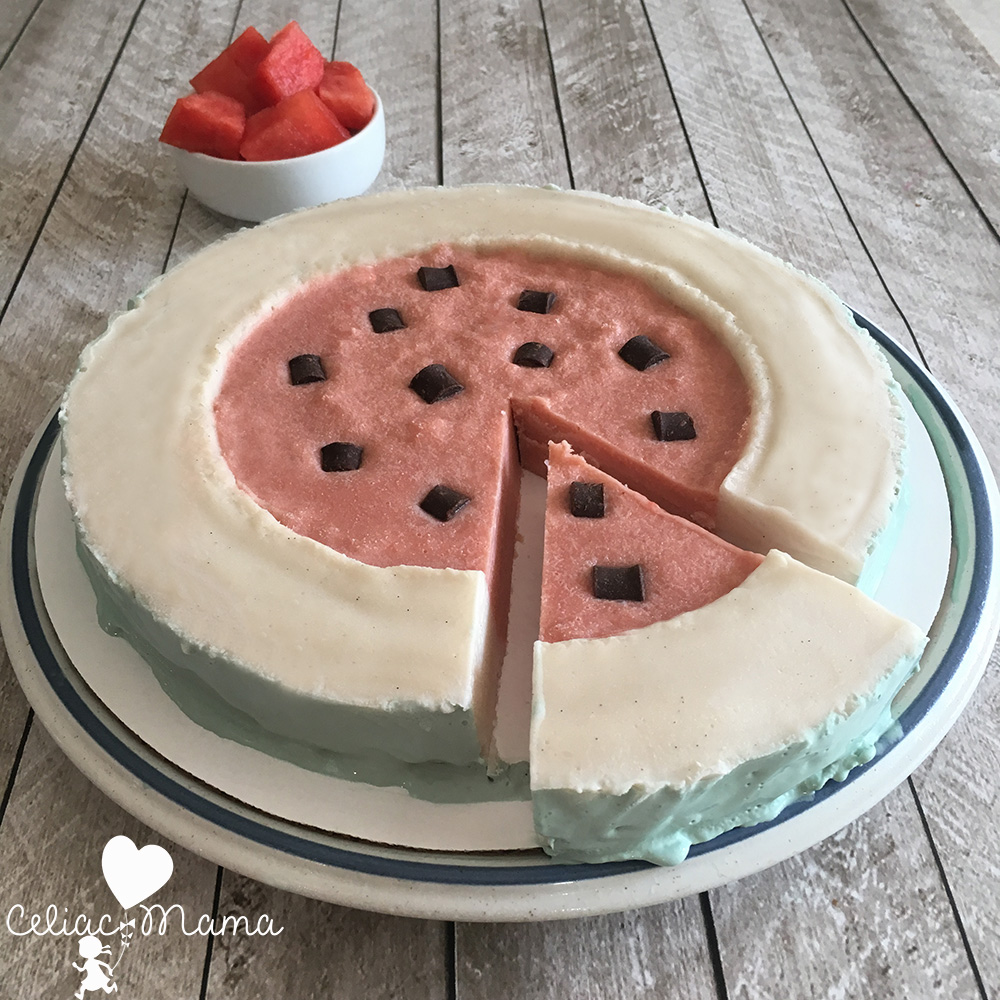 When I was a kid growing up in New Jersey, Friendly’s made a “Wattamelon Roll” that was available throughout the summer. One of my best friends and I liked it so much that we would go buy a roll and eat it right out of the box with two forks…yes, all in one sitting. I realize looking back that eating that much cake at once on what sometimes seemed like a weekly basis was not the healthiest tradition, but it sure was a lot of fun!

I miss those days, and wanted to create a fun dairy free version that my kids would remember fondly when they’re older too. I was so excited when So Delicious invited me to participate in their Dairy Free Frozen Fridays Contest because I knew their amazing products would be perfect for helping me turn my dairy free watermelon ice cream cake idea into a reality. 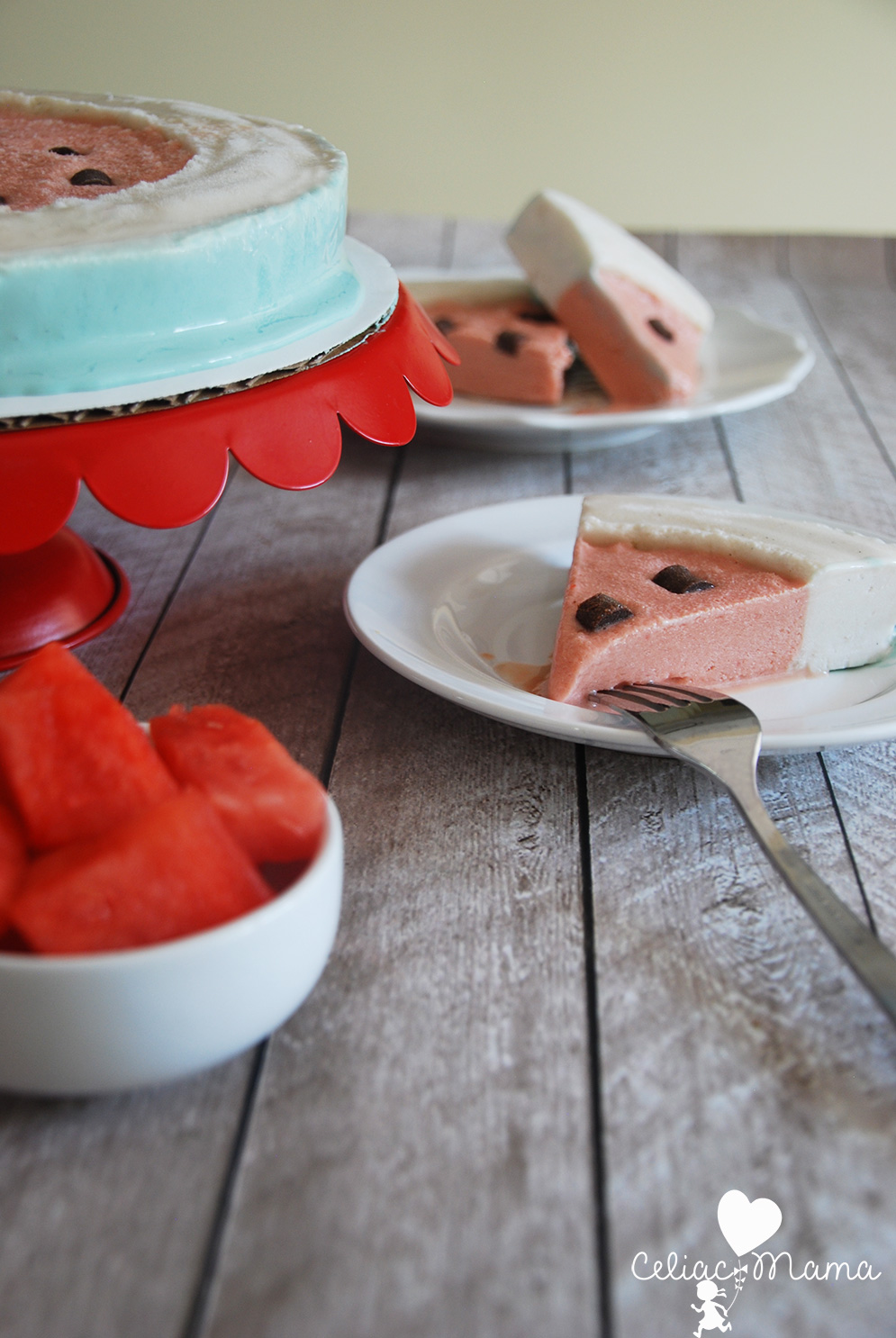 While I had a rough idea about what I wanted the cake to look like, I spent the car ride to the grocery store brainstorming what ingredients I needed. In the end, I picked up fresh watermelon and three of our favorite So Delicious dairy free products: Very Vanilla Cashew Milk ice cream, CocoWhip, and Vanilla Cultured Coconut Milk yogurt.

The first thing I did when I got home was make the watermelon ice cream, which was a combination of 2 ingredients – fresh watermelon juice and So Delicious Very Vanilla Cashew Milk ice cream. Yes, that’s it! Once that was done, I poured it into a bread pan and let it freeze for 5 hours.

When it was time to make the rest of the dairy free watermelon ice cream cake recipe, I took out a 9 inch round baking pan. I needed something round to put in the center to keep the outside layer from leaking into the center of the cake and that’s when it hit me.

The CocoWhip container was the perfect shape and size! So, I washed the outside and placed it in the center of the pan upside down. 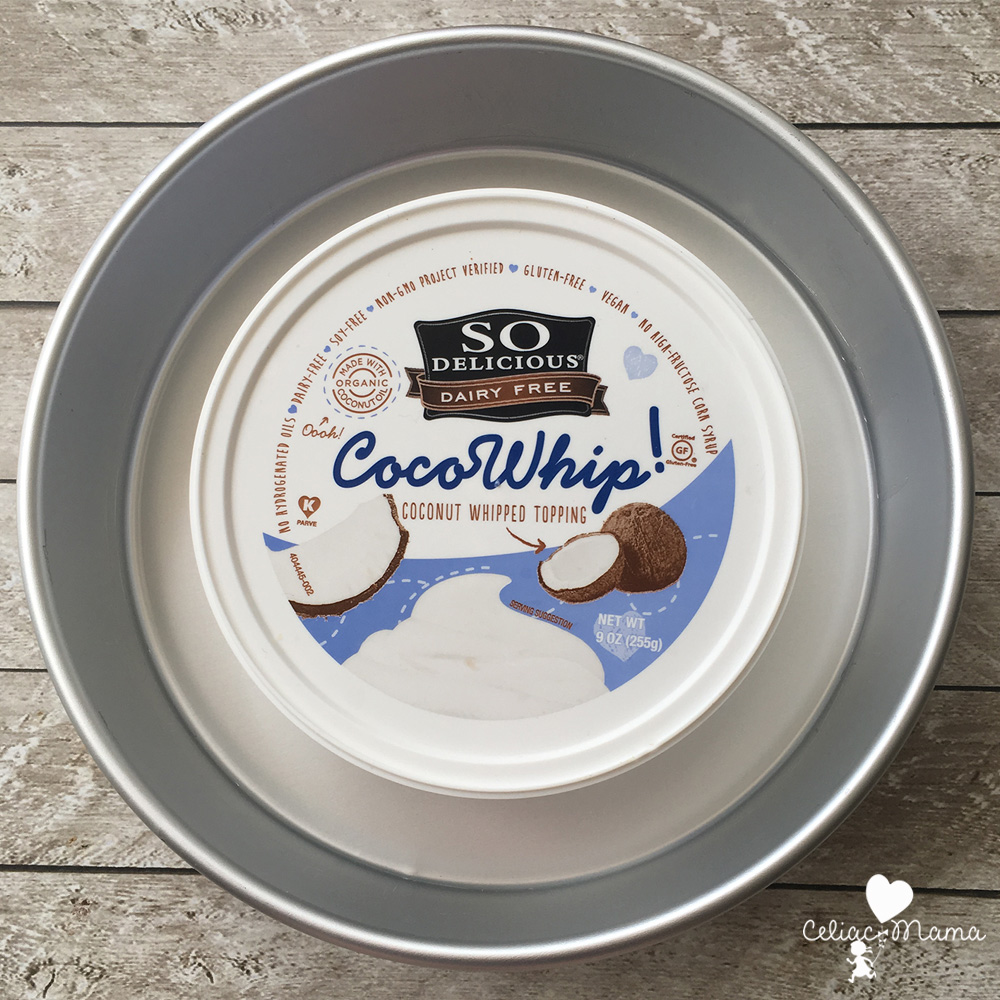 Next, I poured the outside white layer which was a combination of vanilla coconut milk yogurt and ice cream. I probably could have frozen this for one hour, but I wanted the outside to be really solid so that it didn’t melt or combine with the inside watermelon layers.

So instead, I placed it in the freezer for 2 hours. When it was done freezing, I simply twisted the CocoWhip container a few times in a circular direction and it popped right out! Voila, I had a perfect hollow circle in the center of my cake to add the watermelon layer.

I was one step closer to making my dream of dairy free watermelon ice cream cake! When the watermelon ice cream was finished freezing, I scooped it out into a mixing bowl and let it sit for about 5 minutes on the counter. Then I used a hand mixer to make it smooth and poured it into the center of the cake pan. 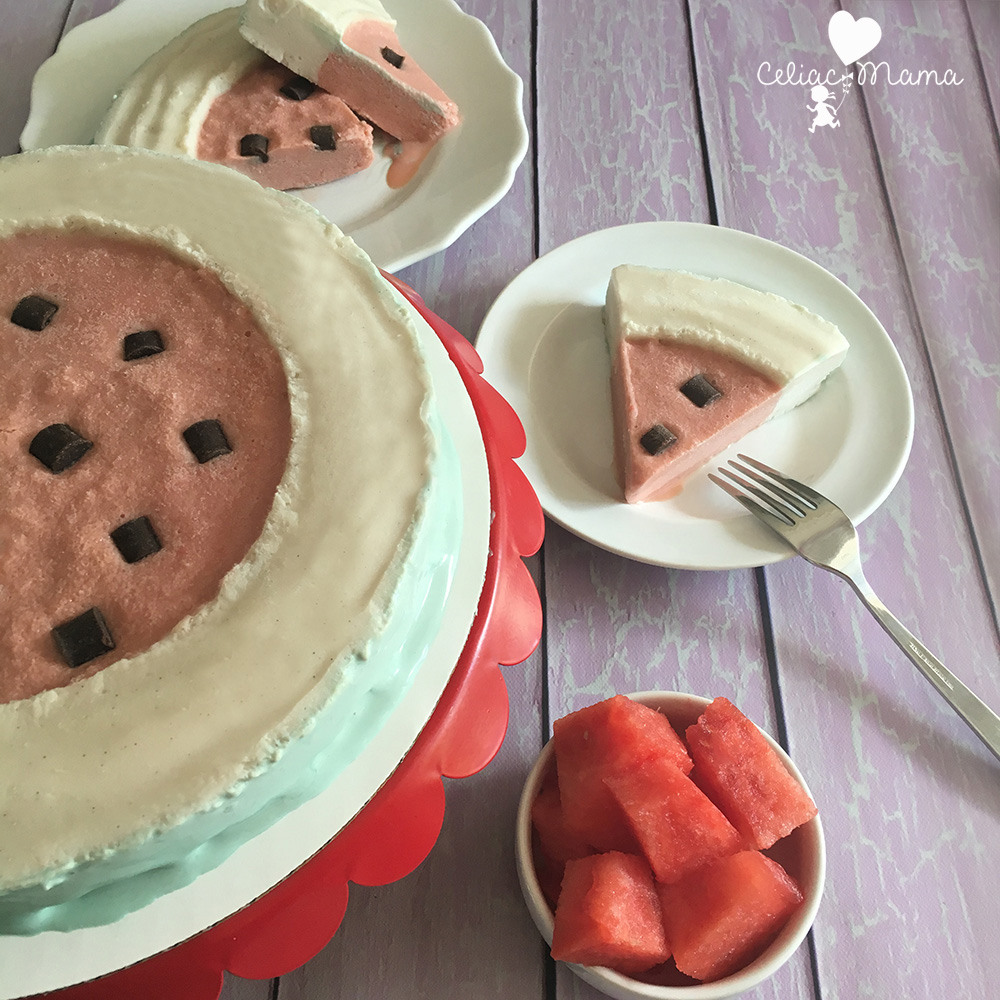 A few minutes before I removed the cake from the freezer, I took out the CocoWhip. I like to use it directly from the freezer for frozen desserts so that when I mix it the consistency stays a bit thicker. I added natural, plant-based green food coloring to the bowl with the CocoWhip and mixed it on medium until it was smooth and the green color I was looking for.

Then, it was time for the cake to come out of the freezer. I was able to remove the cake from the pan without an issue because I had lined it with plastic wrap. I transferred the cake onto a 10 inch cardboard cake circle (though you could use a plate) and frosted the outside layer with the green frosting.

Next, I placed the cake back in the freezer until it was ready to serve. I suggest freezing it for a minimum of 30 minutes.

Here is the full recipe so that you can make some too! 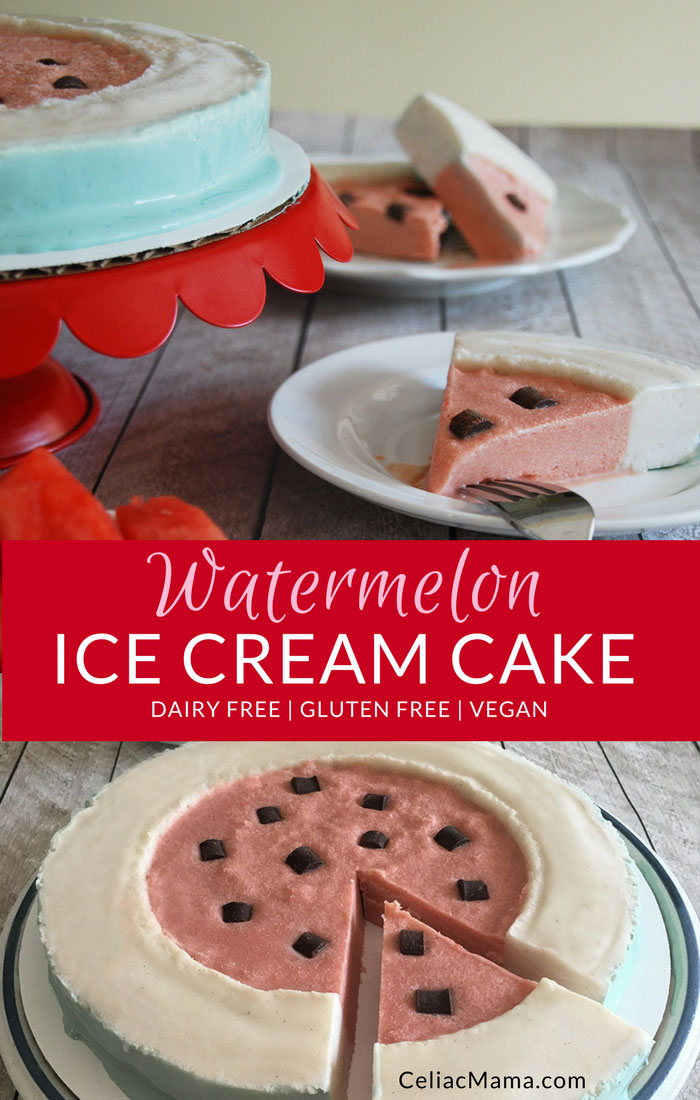 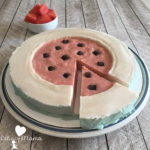 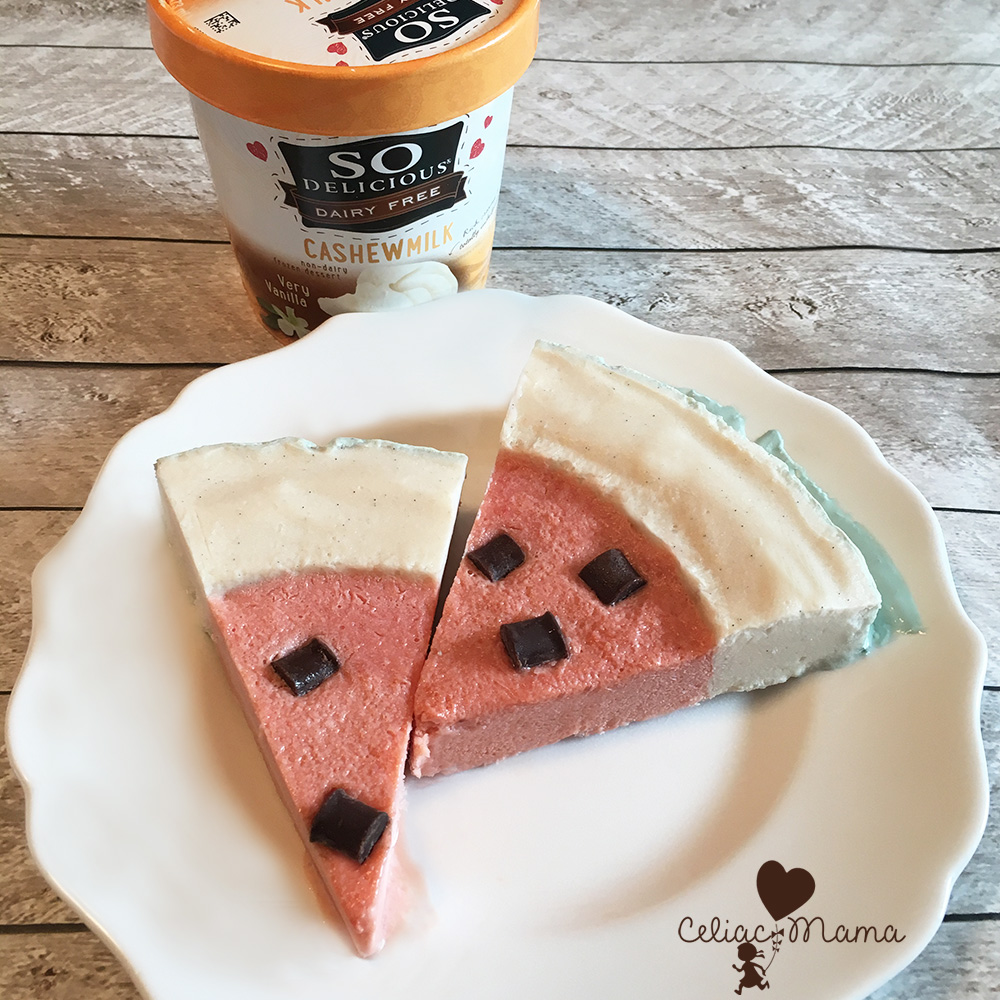 Then be sure to check out: