You are here: Home / GF Parenting Corner / Back to School Gluten Free: Preparing at Home

In my last two blog posts about going back to school gluten free, I spoke about educating the staff and helping the teachers. Working with the school to make sure they understand celiac disease and your child’s needs is key to creating a safe learning environment, but they aren’t the only people you need to prepare for school. Don’t forget to talk to your child. 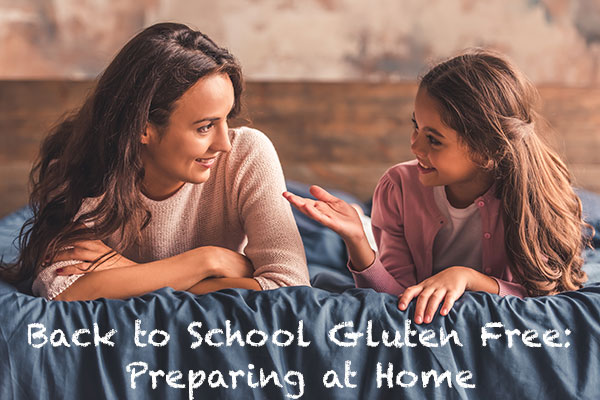 The conversation will differ depending on the age and maturity of your child, but you can talk about what’s most important in an age-appropriate way that they will understand. I believe that kids are brighter and more observant than we might think. In my daughter’s case she definitely understood that she wasn’t supposed to eat gluten at 3 years old, so talking about it openly only helped open up important conversations.

Open communication about snack sharing, feeling different and food envy will build trust between you and your child and it will help your child build self confidence. Here are tips that have worked well for us at home and helped prepare our daughter for school. 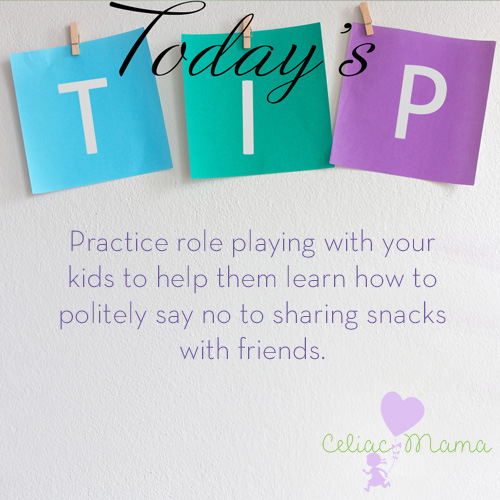 Children with celiac disease or gluten sensitivity may understand that they aren’t supposed to eat foods containing gluten but that doesn’t mean they know how to say no. Sharing snacks is a sign of friendship, and it’s important for your child to learn how to say no in a way that doesn’t make him/her or the friend feel bad. I recommend role playing with young children so that they can practice. The exercise will help them feel more comfortable when they’re inevitably asked if they want a bite of something sugary or when someone else asks if they can stick their hand in their gf pretzels bag.

When we did this with our daughter, we were surprised at how much we learned from the exercise. At first, she didn’t know what to say, but as we continued she became more comfortable and that’s when we realized that her first thought was to ask other preschoolers if the snack contained gluten. That is a smart thing to ask, but not one that many (if any) preschoolers will understand. So, we worked on saying no thank you and how to handle follow up questions, rather than asking for an ingredient list.

Sometimes the feeling of being different due to celiac disease can lead a child to have low self confidence. Every child gets nervous to some degree before the school year begins asking questions like “will I like my teacher, will I make new friends and keep the old, will I do well in my classes”, and in some cases “will the other kids like me even though I’m different.” 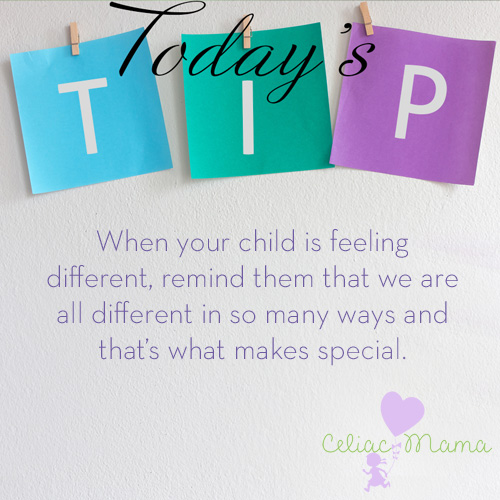 One thing I try to keep in mind, is that while we adults know how important it is to celebrate our differences, kids don’t always feel that way. For that reason, I regularly talk with my daughter about how she’s feeling about school and friends. Sometimes she talks about how she’s the only one that can’t eat gluten and how she doesn’t like being different, and I take that opportunity to remind her that everyone is different. If there’s someone else in school that you know has a food allergy of some kind, point it out. It doesn’t matter if it’s gluten or not, the point is it’s someone else that can’t eat something that she can. I even take it a step further to outdoor allergies and also remind her how some students are better at certain subjects than others and the same is true when it comes to sports.

For the kindergarteners and preschoolers, it may not make sense to bring it up directly before school starts unless they are already vocalizing it. If they’re not vocalizing it and you are worried about making something an issue that isn’t yet, you can try letting them watch shows or read books to them about how people are different in so many ways and they’re not alone. Daniel Tiger’s Neighborhood has a great episode on food allergies called Daniel’s Allergy and another episode about everyone having similarities and differences called Same & Different. This way, they’ll have the knowledge and hopefully remember it if the feelings come up.

It is so important for children with celiac disease to have a positive relationship with food and not look at it like it’s the enemy. To that end, I suggest having regular communication with your child throughout the year about food.

Make a deal with your child at the beginning of the school year that when they see awesome foods that they want to try at school that they need to come home and tell you. Why? Because they shouldn’t go through their lunch periods envying what other kids have when they don’t need to. There are so many ways to make gluten free versions of cakes, cookies, chicken fingers, sandwiches, etc. Second, because it will discourage food sharing which is key to your child staying healthy. Third, because it keeps their relationship with food positive especially if you get in the kitchen and make it together. 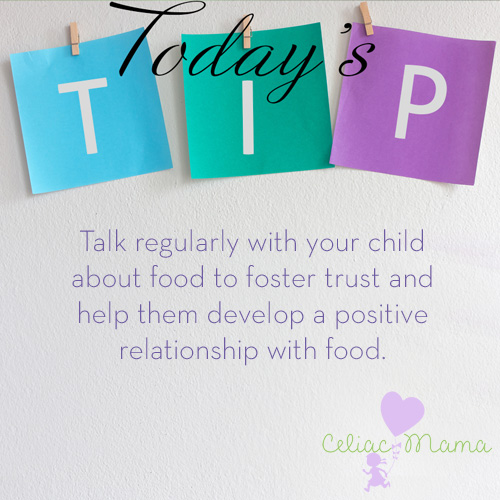 I knew that there would be foods at school that would be enticing to our daughter, so from day one I told her that if she saw something at school that she really wanted to try she needed to tell me and I would make or buy a safe alternative. For the first month of school, I would ask her regularly “What did the other kids eat at school? Was there anything that you saw that you’d like to try?” At first, she always said no. But later, she would come home and tell me about burgers or chicken fingers, or cookies. Healthy eating is very important to us, so I wasn’t going to give her junk food if I could help it. But, there are so many options out there that we always found an alternative that was safe and healthy.

The reality is that children are human, and if they see their friends eating a yummy dessert, they are going to want to try it. Building trust via open communication will help your child come to you so that you can ensure they get that experience and stay safe, rather than having them find out the hard way that they shouldn’t have eaten that cookie.

I hope that you’ve enjoyed reading my series of blogs on going back to school gluten free and that you’ve gained some helpful resources and insight. The advice I’ve been sharing is what has worked well for us, but you know your child better than anyone else and how to help them feel confident and prepared. So, aside from educating the school staff, remember to trust in that parent-child bond you have, communicate regularly and your child will do great.